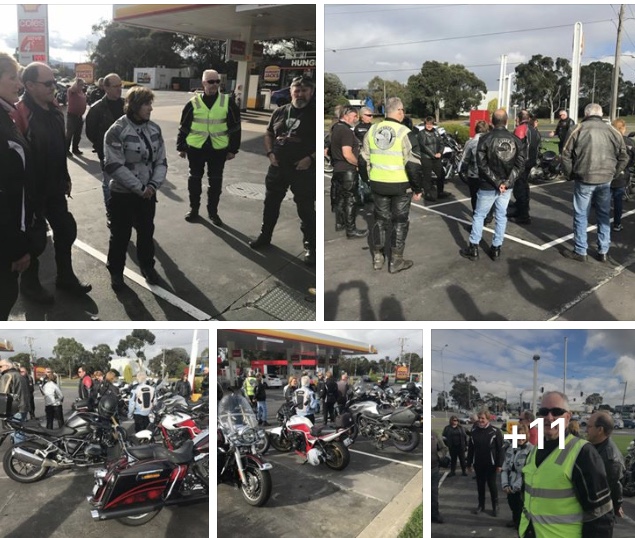 Thank you to ride leader Peter Ross and TEC Barry Hay. We left almost on time from the Shell Servo in Scoresby in bright sunshine. Everybody excited about the trip to coal creek. Fonze, Homer and Kelvin were riding on ahead with sausages and onions to have ready when we arrived. As we got to the Wellington rd and Berwick rd corner we encountered a police man with his speed camera then the first rain cloud opened up on us. Slow going then through the twisties where we lost our first bike when Matt found he had a flat tyre. The rest of us made it through pakenham  ok rain had stopped but heading onto the freeway we lost Tina. Along the freeway and off at the Jinduvick exit we hit the twisties again and had a 15 min break at Jinduvick. That's when we lost Stewie and Sue in a minor incident. From  there to korumurra was some of the best twisties but alas the rain clouds opened up and everybody took their time arriving safe and sound at our destination.
Haven't heard from Matt but I'm sure he made it home. Tina made it home, not sure what the problem was there either. Stewie took Sue to leongatha to get her elbow looked at. Nothing broken but may have ligament damage. Was a sore ride home.
Thank you to everyone that came yesterday. It makes a great ride when you all contribute in a small way to such a great club